In the life of even the same plants have differences in form and not exactly correspond to the landing site.
In order to make the project more attractive and more realistic, LabPP_Landscape provides a new feature that allows you to randomly influence the parameters of the selected objects.
The limits of variation of parameters and the list of parameters that will impact specified by the user.
The new function is called by button with playing dice on the tool palette LabPP_Landscape.
The function applies to objects that are selected in the ARCHICAD window. 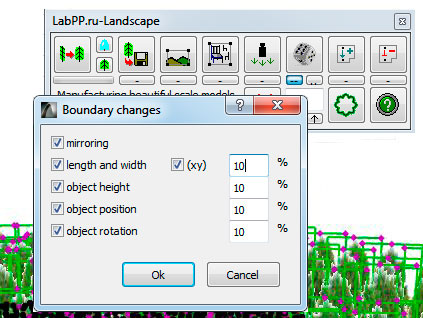 In the following dialog you can specify the following settings:
"mirroring" - when enabled, allows the program randomly flipping objects.
"length and width" - allows you to randomly change the size of objects. The maximum change specified in the box next to the percentage of the current value of the object.
"(xy)" - if the flag is set, then the x and y coordinates will change to a random value, if the flag is not set, then for each coordinate will be calculated own random number.
"the height of the object" - changes the height of the objects ARCHICAD or the ratio of width to height (for objects LabPP_Landscape).
"object position" - the position of the object in the plan. The limits of variation are given in percentage of the current width of the object.
"rotate object" - objects and elements in the sample will be randomly rotated around its axis.
The minimum and maximum change in the parameters input field you can specify in the range from 0 to 100%.
By pressing "OK" the function starts executing.

For best result you can start the function again, or again any number of times.

To use variation of parameters, you should select the objects on which You want to perform this operation.
Not only objects, plants may be subject to occasional change. However, there are often situations when you want to select only objects of plants. For example, if You set the plant on a pedestal, it is desirable that in contrast to plants, the object of the pedestal changes were not exposed.
To select plants quickly and easily use the special button in the following order.
Select the regular means of ARCHICAD objects. Let in grouped objects and other.

By pressing the button in the sample will be only objects of plants.
Then you can immediately perform any operations including automatic variation of parameters.

To obtain the key to LabPP_Landscape

The key will be sent to Your email address.